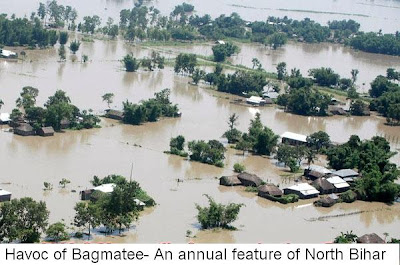 Rampur Kanth, with only 90 families, was a small village located on the right bank of the Bagmati in Bairga

nia block of Sitamarhi district of Bihar in early1970s. In order to protect some areas against flooding, the Bagmati was embanked in then in its upper reaches and the village got trapped within two embankments of the river and had to be relocated in the protected countryside of the eastern embankment of the river.

The village has 259 families according to the census report (2001) with a population of 1,009. Reorganisation of blocks brought Rampur Kanth into the Suppi block of the same district. Relocation meant that any displaced family would get a small plot of land for building a house and a shifting allowance of Rs 300 per family for the kind of houses that Rampur Kanth used to have. No help was given by the state to build the houses.

The displaced persons were also entitled for some common land for roads, schools etc and a hand pump for drinking water. All its agricultural land was located within the embankments which the oustees were supposed to till and continues to be at the mercy of the river. The village is now located on the left bank of the river and all the families are crammed in a plot of 16.86 acres. It took about 3-4 years to get the favour of allocation of land and the displaced people had to spend their time living on the under construction embankment for the interim period.

Part land of the village was lost to the alignment of the embankment, rehabilitation site and the remaining portion was consigned to the river flowing within the embankments which started gnawing it slowly and that opened the doors for the youth of the village to seek employment in greener pastures of Punjab and Delhi as the local employment came to standstill. At the moment, all the working hands of the village have migrated elsewhere in search of employment.

The river came very close to the embankment in July 2007 and only a sand wall in the shape of embankment separated the Rampur Kanth from the river. This sent shock waves to the residents of the Rampur Kanth rehabilitation site as the embankment could slump down any moment and the village would get washed away. On July 29, the residents of the village informed the chief minister, minister for water resources and the flood control room about the impending disaster and repeated their request to the collector of the district on the July 31 for immediate action and copied the message to all other concerned officials and ministers.

Only ADM of the district responded and wrote to the divisional executive engineer to save the people and report back to him of the action taken. Obviously, no action was taken and the embankment gave way at 2100 hrs on the August 18, 2007, exactly one year before the infamous breach of the Kosi embankment at Kusaha in 2008.

Most of the houses were swept away and almost all the residents of the village had to shift to the remaining portion of the embankment in makeshift hutments made of bamboo, leaves, straw, polythene sheets etc.

The collector visited the site on August 20 and issued some instructions to the concerned officials who were now busy digging earth from the heel and toe of the embankment and trying to plug the breach. Thinking that the exercise was a futile attempt to plug the breach, the villagers wrote to the chief minister and the concerned officials for help with no response from anywhere.

Those camping on the embankment did not know till then that the river has not only swept away their dwellings but has also converted their rehabilitation site into a ditch over which no construction was possible unless the ditch was filled up with earth that was nowhere in sight as floodwater was everywhere. They approached engineers and other officials on September 7 again for help but by this time the officials had got used to listening to such woes.

The situations had changed with the outset of winter and so did the charter of demands by the victims of the breach. They had then realised that the breach had debased 134 families and converted their housing sites into a ditch. They wanted the ditch to be filled, compensation for the loss of property, monitory help for building houses and action against the guilty officials under law of the land and their suspension. It is reported that grant for constructing houses for 134 families reached Sitamarhi but the mukhia of the village started demanding Rs 5,000 per family as bribe so that the grant could be advanced to the victims.

The villagers refused to pay him and he modified the beneficiary's list to 185 to include his men in it. The government smelt a rat in the proceedings and withdrew the grant. The flood victims wrote to the CM, minister for disaster management, commissioner, and the district collector of Sitamarhi to do something for them. That was December 15, 2008 and over a year had passed since the breach had occurred.

This prayer induced the administration to ensure that the eroded land is filled with earth to facilitate house building. The contractor, however, did not find the job rewarding and left it half done although he turned the remaining portion of land up side down. The site remains unfit for house construction and all the 134 residents are still camping on the embankment in their huts.

The state government is raising, strengthening and extending the Bagmati embankments at an estimated cost of Rs 792 crore and this work is reflected all over from Dheng to Runni Saidpur and beyond except Rampur Kanth where no work has been done because the people are camping over there and refuse to shift elsewhere unless their demands are met. They are still demanding filling of their land and some grant to build their houses. The government also might be willing but the apathy of officials prevents any action on the ground.

Says Arun Kumar of the village, "We tried to contact some NGOs also and one of them was willing to help us with building houses but needed the land where the houses were to be built and we showed the ditch that needed filling first and filling the land was not on the agenda of the NGO. The story ended there."

In the meanwhile, there was a janata darbar of the chief minister at Raghopur Bakhari village in Dumra block of Sitamarhi on January 24, 2009 and the residents of Rampur Kanth went there to give a representation to the CM. It is reported that the chief minister had assured these villagers that their problems would be solved soon. Yet, nothing happened and the villagers once again approached the collector of Sitamarhi on the February 2, 2010 requesting him, to complete the half done work of filling of the homestead land and that all the 134 families be given housing grants under Indira Awas Yojana to compensate for the losses incurred due to breach in the embankment in 2007.

to provide a hand pump for them for drinking water.

That was the progress made after toil of over two and a half years' knocking at every door, from the local mukhia to prime minister of the country. They have come back to the same situation that the river had put them in on the night of August 18, 2007 braving rains, cold and heat waves ever since. Sand that blows with summer winds tests their patience and the government feels contended that the people are equipped to boldly face any problem, be it forthcoming rains or the chill winter for the past three years.

Rampur Kanth should not become an example for the others to make such demands and it might be trying to nip the bud in the beginning. It is worth noting that the Bagmati embankments have breached 43 times during 1997-2009 period according to official sources.

They would also not have come to rehabilitation sites if they had known that all the concerned officials would shrug off their responsibility to the people once a calamity like the one of 2007 strikes them. They are scared that the river might sweep the remaining portion of the embankment anytime and there is none in the administration to take cognisance of the imminent danger they will be faced with.

Will someone listen to the woes of the people of Rampur Kanth?