A pair of guard dams built inside the embankments of the Kosi river has now put at stake the survival of nearly 70,000 residents of 52 villages located in Nirmali and Saraigarh Bhaptiahi blocks of Supaul district. The structure acts as a bow-shaped funnel designed to make a 15 km wide river pass th 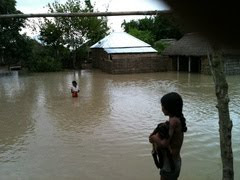 rough a narrow 1.8 km passage underneath a rail-cum-road bridge being constructed at Sanpataha, Nirmali. The rise in the water level caused due to funneling of the high intensity flows of Kosi water through the narrow passage has led to full or partial submergence of 52 villages in Nirmali and Saraigarh Bhaptiahi blocks of Supaul district in Bihar.
Current situation (August 24, 2010)

Most of the affected habitations have been abandoned by their residents. Thousands of affected villagers have fled and taken refuge on the highways and embankments. Some have moved to villages that are not fully submerged yet. Nearly every household has someone with fever, Diarrhea or other water-borne diseases. No relief has been provided to people marooned in the villages, who are facing acute starvation and surviving with great difficulty. Supply of PDS commodities has been completely stalled in the area for several months. With the Govt. of Bihar declaring all the 38 districts drought-affected and with the electoral code of conduct likely to be imposed any day in the run-up to the elections to the legislative assembly, people have little hopes of receiving any support from the government.

Premonitions of being wiped away weigh heavy in the minds of the inhabitants of the area. The submergence of the 52 villages came about at a moderate discharge of around 1.5 lakh cusecs of water through the Kosi barrage in Nepal, which is less than a fifth of the peak rate of discharge through the barrage. According to villagers, the situation wasn’t so grim even in 1969 when over 9 lakh cusecs of water had been discharged through the barrage. Now with the guard dams subjecting them to face sudden spurts in water level, they have no option but to make up their minds to move away to other areas, abandoning their community relationships, legacies of the past and household resources!

The rail-cum-road project was sanctioned and initiated without any assessment of social, human or environmental costs of the bridge. Although a technical assessment was carried out, it doesn’t even mention the name of any human habitation falling in the course of the river. Several of the assumptions and projections made in the technical assessment have already proved to be faulty. Needless to say, neither any sections of local communities or elected local representatives were consulted before or during the process of construction of the guard dams, nor was any compensation ever offered to them! Even basic information regarding the likely implications of construction of the dams was denied to them.

The most critical issue relates to accountability for any probable calamities caused by the guard dams in future. Inhabitants of the area, mostly illiterate, labour-dependent rural people, know that a catastrophe has already been scripted and thrust upon them without their consent. However, it’s difficult for them to reverse the decisions taken or to change the course of things. If a calamity were to occur in future, no one is likely to be held accountable.

The injustice comes as a double blow to people, who have been forced to live with floods for nearly sixty years, since the Kosi embankments were constructed. For over three generations, people have been deprived of due compensation for their losses and successive governments have been treating the area enclosed between the embankments as virtually a no man’s land, despite its occupancy by over a million inhabitants of 380 villages, fragmented across multiple electoral constituencies and thus not forming a vote bank large enough to interest the political class.
(courtesy- Causes)
Posted by रंजीत/ Ranjit at 1:16 am