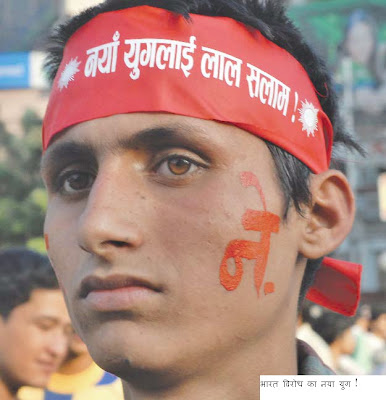 For CPNM, anti-india protest is only the part of their politics. Any may be thats why the general people are not joining them now.

They are pre-mature in politics.

But still, its the Truth that, India is interfering on our internal matter and land.

We think everybody is free to create or disseminate any legal groups or organization. We are pretty much liberal ans we love this.

Dear Milan brother
Being a sovereign country Nepal has every right to make friend and open any kind of socio-economic-academic institution/centre etc with any nation in their territory. one can not oppose this. But same is not true with Nepal based Chinese Centre. can U say me that why Chinese centres are opening along Indo-nepal border. Why they R not choosing Kathmandu,Nepalganj,Humla Bheletand in liew of Kakarbhita,Lahan,Beergang,Brtnagar?
if you still believe that it's ok then I have nothing to say.
Thanks
Ranjit

The most probably reason of this why is from Kakadbhitta to Kanchanpur and from Summit of Mount Everest to birth place of Gautam Buddha Lumbini everything everywhere belongs to Nepal. I don’t know why Indian people think as if northern side of Nepal-India border is also their sole property.

If objective and procedure of any institution is legal according to prevailing law of Nepal, everybody is welcomed to open any kind of organization anywhere in Kathmandu, Biratnagar, Humla, Birganj, Jajarkot or Nepalgunj and anywhere in Himalaya, Hills and Terai…. It does not matter.

But the shown and hidden objective of such organization must not aim to create hatred among society and they must not aim against any neighbor and friend nations.

We never want any Chinese intelligence bureau or Indian RAW or Pakistani ISI making fight and conspiracy in our land. We are neutral.

And one more thing,
It may not be part of our concern, but if I have to explain I don’t think china need the way of Nepal to access India. Indo-china border is much longer then Indo-Nepal border. They have easy access to India every time from everywhere. And they have proved it on 62.

The most important thing is the willingness to work together and belief in each other. I don’t know why Indian policy maker and media always try to create hatred and unbelief to their neighbor.
India’s bitter relationship with its entire neighbor from china, Pakistan to Nepal, Sri Lanka, Bangladesh is not only the co-incidence. The so called world largest democracy needs the larger heart in same ratio.

@milan
Every lieterate people of this world know about the brotherhood and peace-loving Charactor of India. you and me have no right to discuss about the heart and charactor of India. As far as indian Border-issue is concerned it exist so far only because India believe in co-existance. if India had followed the path of "62"; at least 3 of it's neighbours have had out of station.
I am noticing that you are deliberately escaping from fact and and taking everything blindly. it's always need objectivity to understand Inter-state issue.
I had only discussed about NCPM ill-activity and you are seeming to justify this. any way it is your problem.