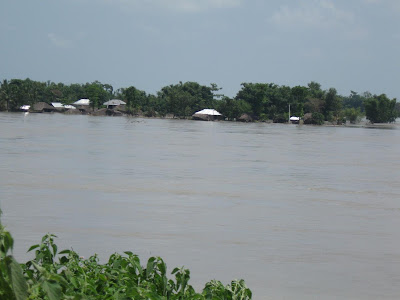 Whenever Babuji Sah walks towards his village, Birbar, he says he feels like an ageing camel struggling to find his new address in the sand-filled desert. That is because Birbar is forced to move location every three to four years. The pathways and byways of the village are constantly eroded by the fast-flowing river. Mr Sah is not alone in his predicament. As the Kosi's embankment is eroded, the river deposits silt and sand on more than 380 villages located between the embankments forcing the villagers to set up camp elsewhere. The villages affected by this phenomenon are known locally as "floating villages" - because they are constantly on the move.

Rajendra Jha, who works for the welfare of the people living in these "floating villages" through his organisation, Barh Mukti Abhiyan, says "the only constant in the lives of these villagers is the name of their village". "The villagers hold on to their identity by retaining the name of their village," he says. Mr Sah's Birbar village has changed its location three times and is gearing up for its fourth move as the monsoon approaches. It is a worrying prospect for Mr Sah and many of his neighbours like Jiya Lal Yadav, Lucho Sharma, Shyam Sharma and Anandi Thakur. "Again, we have to move to another place with a new address," says Anandi Thakur. Like Birbar, the residents of neighbouring Sirbar, Charnia, Bishanpur and Dahnuj villages are also looking for vacant spots in the landscape to migrate to when the Kosi river devours their present location. "We have no option. We're trapped between embankments. Our agricultural land is located here," Mr Thakur says pointing towards his land covered by silt brought in by the turbulent Kosi. The shifting sands have reduced the villagers to paupers while their environment, culture, social fabric, flora and fauna have all been dramatically affected.

"Villagers who live outside the embankment refuse to marry their daughters to boys living in these floating villages," says Dinesh Kumar Mishra, Kosi expert and convener of Barh Mukti Abhiyan. In many places the farmland is covered in sand and has turned into wasteland which has been taken over by bandits and criminals, he says. Bihar has around 3,440km (2,137 miles) of river embankments, nearly all in the north of the state. According to an assessment done in 1994, the flood-prone area in the state increased to nearly 7 million hectares from 2.5 million hectares in 1952. "Embankments provide partial protection to people by preventing the river from overflowing its banks during times of floods, but they also prevent the flood water from going back into the river and this leads to a major problem," Mr Mishra explains. In August 2008, the Kosi breached its embankment at Kusaha in Nepal causing a catastrophe in northern Bihar with huge loss of human life and property. Ever since 1963 when the Kosi barrage was constructed at Bhimnagar (in Nepal), river water has inundated Bihar's northern villages 37 times. And for villages sandwiched between embankments, every monsoon is a time of dread. "Nothing grows on waterlogged and eroded land covered in sand and silt," complains Shyam Sharma of Birbar.

The villagers say they continue to pay government taxes - 22 rupees per acre each year - for their submerged land because "we have no idea when the Kosi will change its course and if we will be able to reclaim our land".

"My father protected the submerged land for me and now I'm protecting it for my sons and grandsons," Mr Sharma says। In government records, however, these villages on the move are "illegal" and not entitled to any compensation. In 1956 when the Kosi embankment was being constructed, the government offered a relocation package which included land for a house outside the embankment, but no agricultural land. "For villagers it was tough to live outside the embankment and take their cattle for agriculture inside the embankment. So they decided to live inside the embankment and bear the brunt," Mr Mishra says. Local government official Parmanand Sah admits that there is no provision for compensating the villagers for their displacement. "Every year villages inside the embankment submerge and they [the villagers] move to a new location," he says. But district officials also say that land revenue is collected from the villagers for farmland. "Government rules allow only irrigation inside the embankment and the human population is not allowed," an official said. For those living in these floating villages, life is tough - there is no hospital, no school, no government ration shop, no police station and no post office. The only way to reach them is by boat. Little wonder that migrations from these villages are as frequent as the Kosi flood. The young men generally migrate to work as agricultural and construction labourers, whereas children find work in the carpet industry in neighbouring Uttar Pradesh state. "Only the elderly and women remain in these villages to float with life and the turbulent Kosi waters," says a villager.